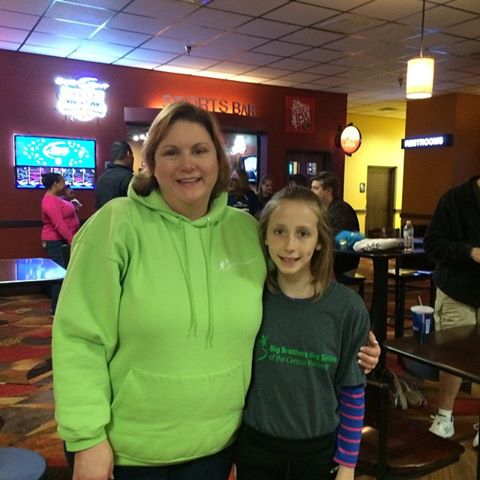 Melissa and Mackenzie were matched in July of 2014.  Although they have not been matched very long, Melissa has provided Mackenzie with many “firsts”.   Early in the match, Melissa stated that she hoped to expose Mackenzie to things and places she has never done or been to before.  So far, some of these things have included a trip to Dan Nichols Park, checking out a Black Hawk helicopter, getting a manicure, and participating in a 5K at Tanglewood.   Mackenzie started playing basketball this year and Melissa attended the games.  At the end of the season they celebrated with a trip to see the Harlem Globetrotters.  With all of the fun, big outings, they also have some time just hanging out at Melissa’s home where they may have dinner, do origami, walk the dogs or work on homework.

During their time together, Melissa encourages Mackenize to work hard to achieve her goals.  She sees huge potential in Mackenzie and has already started talking with her about turning her love of math and science into an engineering career.   She tries to encourage areas that may not be Mackenize’s favorite by making it fun.  For example, they plan to read a book before going to see the movie based on it.

Melissa is a great Big Sister to Mackenzie, but she also works to serve the agency as a whole.

Melissa decided to participate in our annual Bowl for Kids Sake Event and took on the challenge of not only raising the Team Goal of $500 but going after the $1000 VIP Prize! After asking friends and family for support and hosting a BBQ at her husbands work she raised $1000! Her support of our agency and her Little Sister is priceless and we are so thankful to have her as a volunteer.