November Match of The Month! 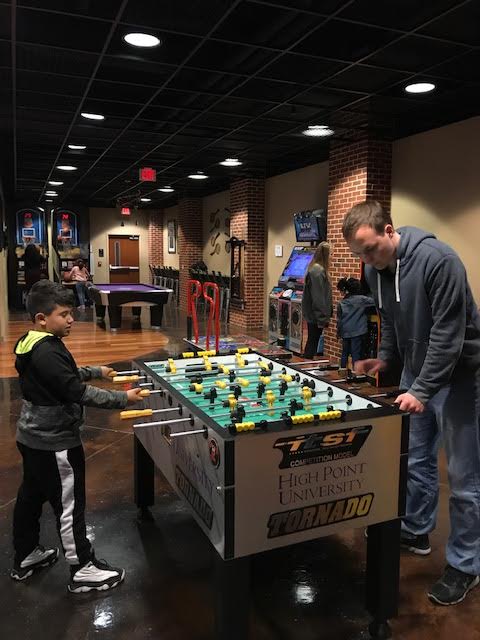 Trevor was matched with his “Little” Jeremy in November 2018 in the site based program.

Some of the activities Trevor and Jeremy prior to COVID-19 were playing basketball, playing board games like Monopoly and Headbands, they also built Legos, and attended activities at High Point University. One of those activities was going to the HPU Arcade. Jeremy said that was so much fun. Then when Trevor had to travel to Italy last semester for his abroad experience, they stayed connected via video call. Jeremy often shared with Match Support Specialist Adriana that his Big always encouraged him to be respectful to others, and show respect to adults. He also said that he has been a great influence in school. He said he wants to do better in school to be able to tell his Big that he is doing better. Once COVID-19 happened and they were not allowed to see each other in person, they continued to stay in touch via video call. Trevor also had the initiative to buy Jeremy some of the Harry Potter books because he wanted Jeremy to improve his reading. They met once a week via video call and discuss the book and caught up about their weekly activities. Trevor has always showed high energy in his interactions with his Little Jeremy. When he was in school, he was always enthusiastic about playing with Jeremy, and Jeremy was always looking forward to see Trevor.

This semester, MSS Adriana invited them to participate in the High Point University LASER Astronomy project. When Adriana sent out the invitations to join the LASER Program to all of her Bigs, Trevor was the first Big to respond that he wanted to participate among with his Little Jeremy. This LASER Astronomy project is sponsored by Dr. Barlow, who teaches Astronomy at HPU. Dr. Barlow decided to partner with Big Brothers Big Sisters for this outreach project. In this LASER program, students from Dr. Barlow’s class show Bigs and Littles how to access remote telescopes. They are granted personal access to robotic telescopes located around the world. They are learning how to take images of planets, nebulas, galaxies and the moon. When MSS Adriana asked Trevor how Jeremy was doing in this program, he said that Jeremy was understanding everything very well, and that the pictures he took and submitted to Dr. Barlow were always one of the best. He said Jeremy’s pictures were often used as an example during his Astronomy class. He said that Jeremy’s pictures were of a better quality than some of the Astronomy students themselves. Trevor said they meet twice a week during Zoom, one time to do the Astronomy weekly assignments, and the other time to talk about life and continue with Astronomy with their program leader. Trevor shared with Match Support Specialist Adriana that he feels his relationship with Jeremy has grown so much. He said he can tell that Jeremy’s organizational skills have improved. He said he is teaching him the basics of Geometry on how to work the angles. Trevor said his future goals are to teach Jeremy more Geometry and more Astronomy. He wants Jeremy to be able to see the big picture. He said he also wants to teach him more math so he can be better prepared when entering middle school. Trevor and Jeremy both said that they have so much fun when they are together.